Change your language and you change your thoughts.” –  Karl Albrecht

Card sorting is a specialized type of user test that is useful for assessing how people group related concepts and what common terminology they use.  At its simplest form, a card sort is the processes of writing the name of each item you want to test on a card, giving the cards to a user and asking him or her to group like items into piles. There are however, a number of advanced options and different types of card sorting techniques.

Open Card Sort – An “open” card sort is when you do not provide users with an initial structure. Users are given a stack of index cards, each with the name of an item or piece of content written on it. They are then asked to sort through and group the cards, putting them into piles of like-items on a table. Users are then asked to categorize each of the piles with the name that they think best represents that group/pile. Open card sorts are usually conducted early on in the design process because it tends to generate a large amount of wide ranging information about naming and categorization.

Given the high burden on participants and researchers, I personally find an open card sort to be the least attractive method for most contexts. It is, however, the most unbiased approach. As a general rule, I would reserve this method for testing users with a high degree of expertise in the area being evaluated, or for large scale exploratory studies when other methods have already been exhausted.

Closed Card Sort – The opposite of an open sort, a “closed” card sort is when the user is provided with an initial structure. Users are presented with a set of predefined categories (usually on a table) and given a stack of index cards of items. They are then asked to sort through the cards and place each item into the most appropriate category. A closed sort is best used later in a design process. Strictly speaking, participants in a closed sort are not expected to change, add, or remove categories. However, unless the context of your study prevents it, I would recommend allowing participants to suggest changes and have a mechanism for capturing this information.

Reverse Card Sort – Can also be called a “seeded” card sort. Users find information in an existing structure, such as a full site map laid out on index cards on a table. Users are then asked to review the structure and suggest changes. They are asked to move the cards around and re-name the items as they see fit. A reverse card sort has the highest potential for bias; however, it’s still a relatively effective means of validating (or invalidating) a taxonomic structure. The best structures to use are ones that were defined by an information architect, or someone with a high degree of subject matter expertise.

Modified Delphi Card Sort (Lyn Paul 2003) – Based on the Delphi Research Method[1], which in simple terms refers to a research method where you ask a respondent to modify information left by a previous respondent.  The idea is that over multiple test cycles, information will evolve into a near consensus with only the most contentious items remaining. A Modified Delphi Card Sort is where an initial user is asked to complete a card sort (open, closed, or reverse), and each subsequent user is asked to modify the card sort of their predecessor. This process is repeated until there is minimal fluctuation, indicating a general consensus. One significant benefit of this approach is ease of analysis. The researcher is left with one   final site structure and notes about any issue areas.

Online Card Sort – As the name implies, this refers to a card sort conducted online with a card sorting application. An online card sort allows for the possibility of gathering quantitative data from a large number of users. Most card sorting tools facilitate analysis by aggregating data and highlighting trends.

Paper Card Sort – A paper sort is done in person, usually on standard index cards or sticky notes. Unlike an online sort, there is opportunity to interact with participants and gain further insight into why they are categorizing things as they are.

Why Use Card Sorting?

When is Card Sorting Most Useful?

Card sorts are useful in the requirements gathering and design stages. Depending on where you are in the design process you may get more or less value from a given method (open, closed, reverse, etc).

How to Conduct a Card Sort

Card sorts are one of those things that are somewhat easier to conduct than to explain. Because there are so many variations, I’ve decided to illustrate the concept with a walkthrough of an actual project case study. I was recently brought into a card sorting study by a colleague of mine[2] who was working on a complex taxonomy evaluation. The project was for a top toy retailer’s e-commerce site. After weeks of evaluating traffic-patterns and other data, my colleague had developed what he hoped would be an improved new site structure. He wanted to use card sorting techniques to validate and refine what he had developed. 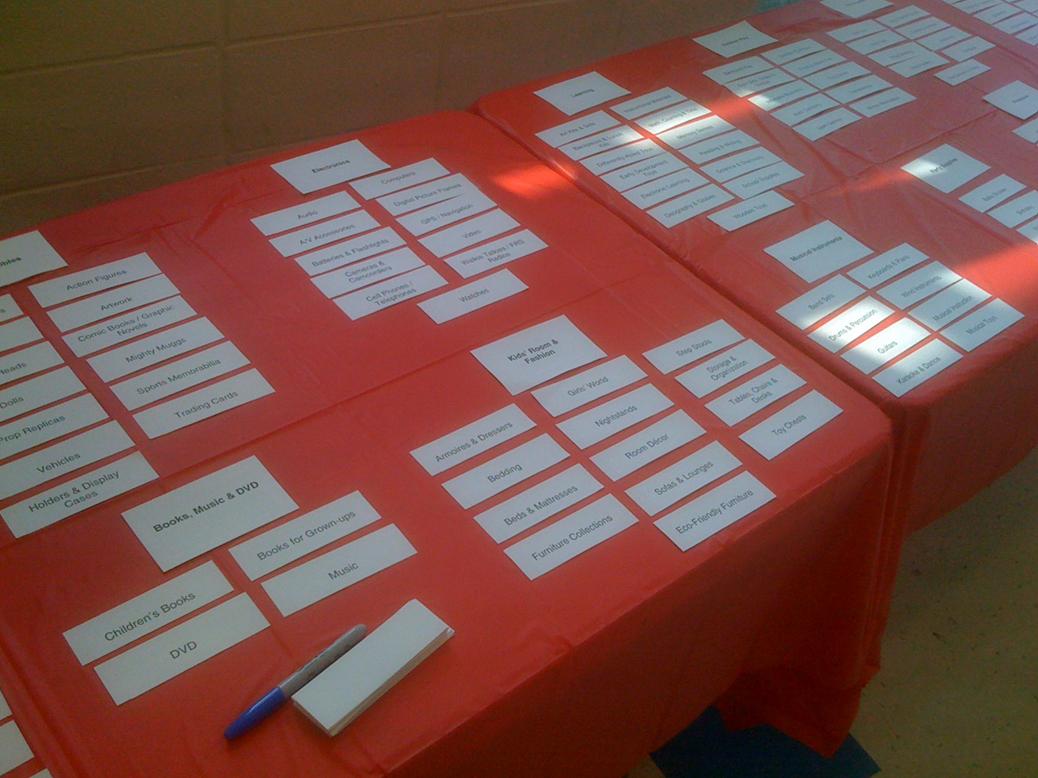 “If I have a thousand ideas and only one
turns out to be good, I am satisfied.” – Alfred Bernhard Nobel

UXD prototyping is a robust topic and difficult to adequately cover in this type of overview guide. Therefore, I do so with the caveat that I am only providing the tip of the iceberg to get you started, with some references to where you can learn more.

Prototyping is not a research method, it is a research tool. An important thing to understand about UXD prototypes is that the term “prototype” itself can mean something slightly different to the UXD community than to the software development community at large. For example, one of the more common engineering usages of the term refers to an operational prototype, sometimes called a proof of concept. This is a fully or partially functional version of an application. UXD prototypes are, however, not usually operational. Most often they are simulations focused on how a user might interact with a system. In the case of the “paper prototype”, for example, there is no functionality whatsoever, just paper print-outs of software screens.

There are many different names for types of prototypes in software engineering, most of which describe the same (or very similar) concepts. Here are some of the most common terms:

Semantics aside, prototypes are probably the single most powerful tool for the researcher to understand user behavior in the context of the product being developed. Some commonly used prototypes in user testing are;

When is a Prototype Most Useful?

Because the actual prototype creation process is highly specific to what you are creating and what tools you are using (paper napkins, layout tool, whiteboard, etc) I’ve included a few considerations for defining a prototype instead of detailing the mechanics of creating one.